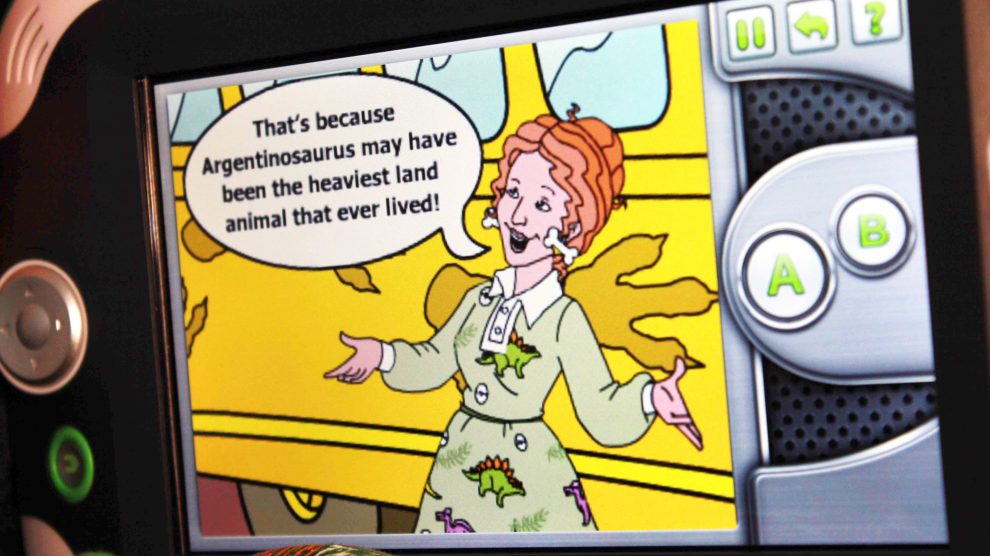 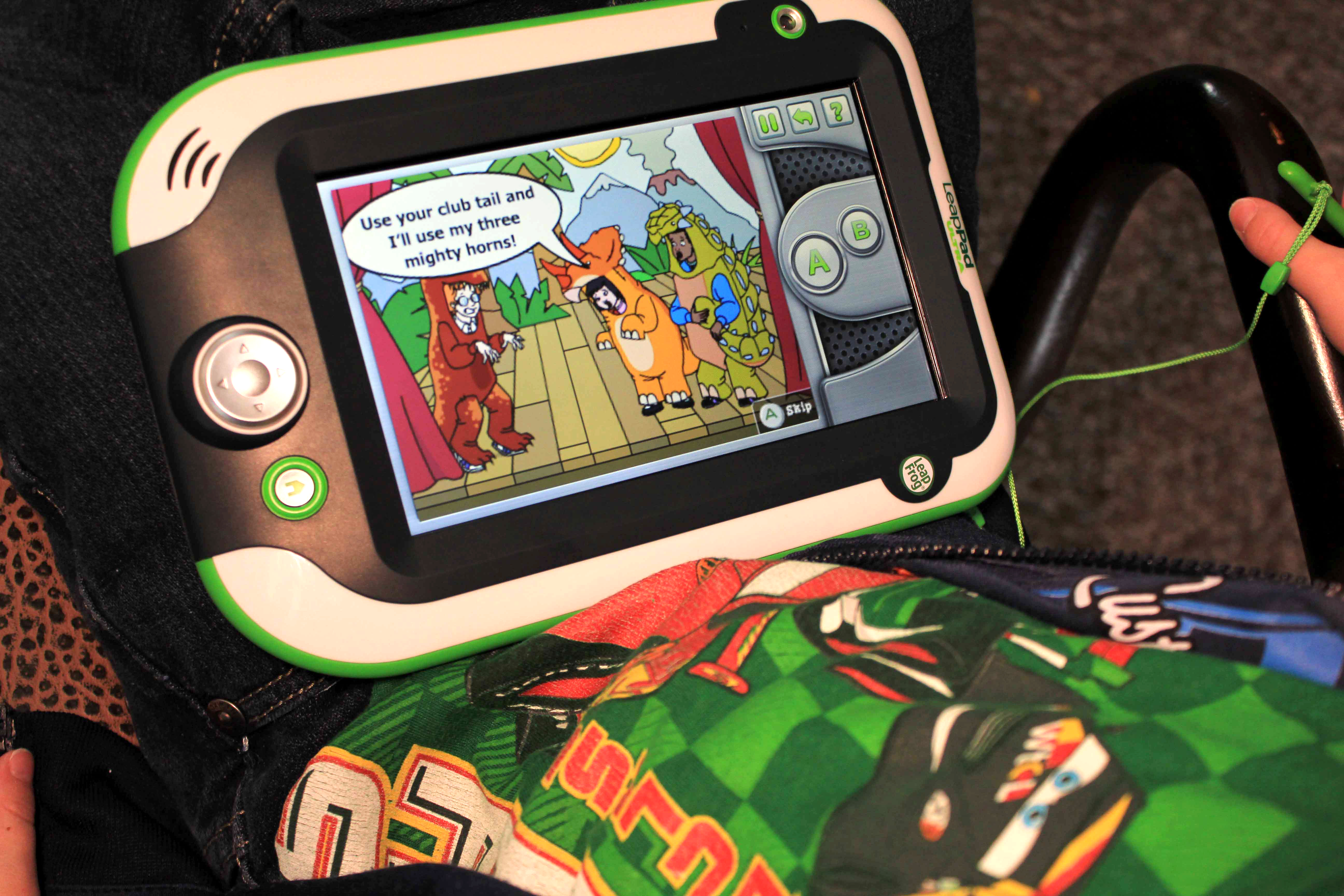 The Magic School Bus Dinosaur game from LeapFrog was the surprising winner this week. I don’t know about you, but my kids are usually most excited about games and books that feature characters from their favorite movies. I tell you, they will play anything with Kung Fu Panda on it.

Their propensity to stick with tried and true faves is the only reason I was surprised at my kid’s reaction to the Magic School Bus Dinosaurs game. While I have fond memories of Mrs. Frizzle and her off kilter teaching methods, my kids have none. Is it even on TV anymore?

Anyway, when given the choice between four brand new LeapPad Ultra games—some featuring their favorite characters—the kids went for The Magic School Bus. I was surprised, but pleased. Maybe it’s because we take them to the nearby dinosaur museum on occasion? I’m still puzzling it out.

What does it do? 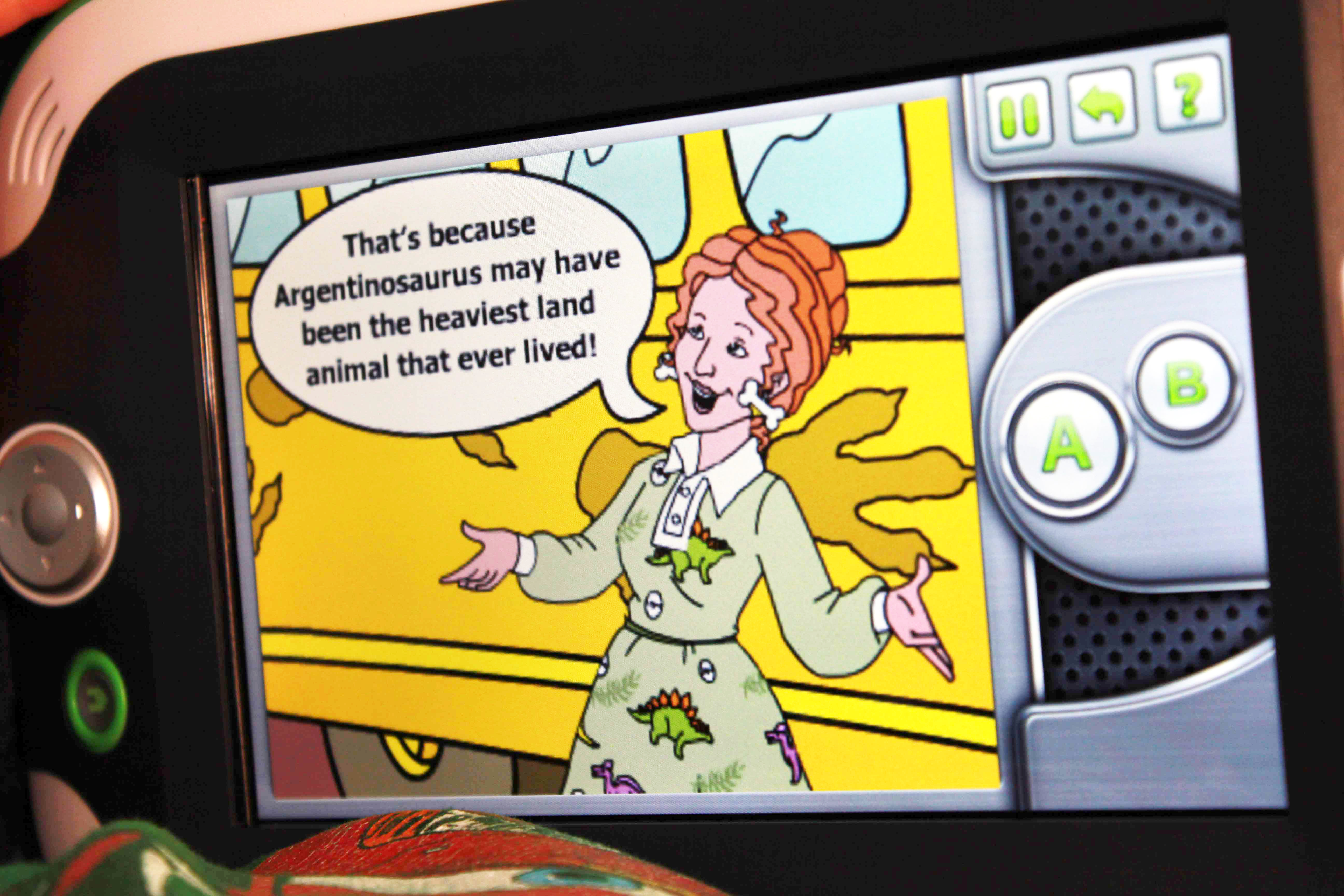 Mrs. Frizzle’s students are putting on a play. Not just any play, but a dinosaur play, and some of the kids just aren’t feeling it. So, in order to save their production, Mrs. Frizzle whisks the kids off to three different prehistoric eras to learn first-hand about their dinosaur characters.

The kids learn facts about each dinosaur as they complete tasks. When they pass the quiz at the end of the round they “win” that dinosaur and get to play a game as if they were that dinosaur. 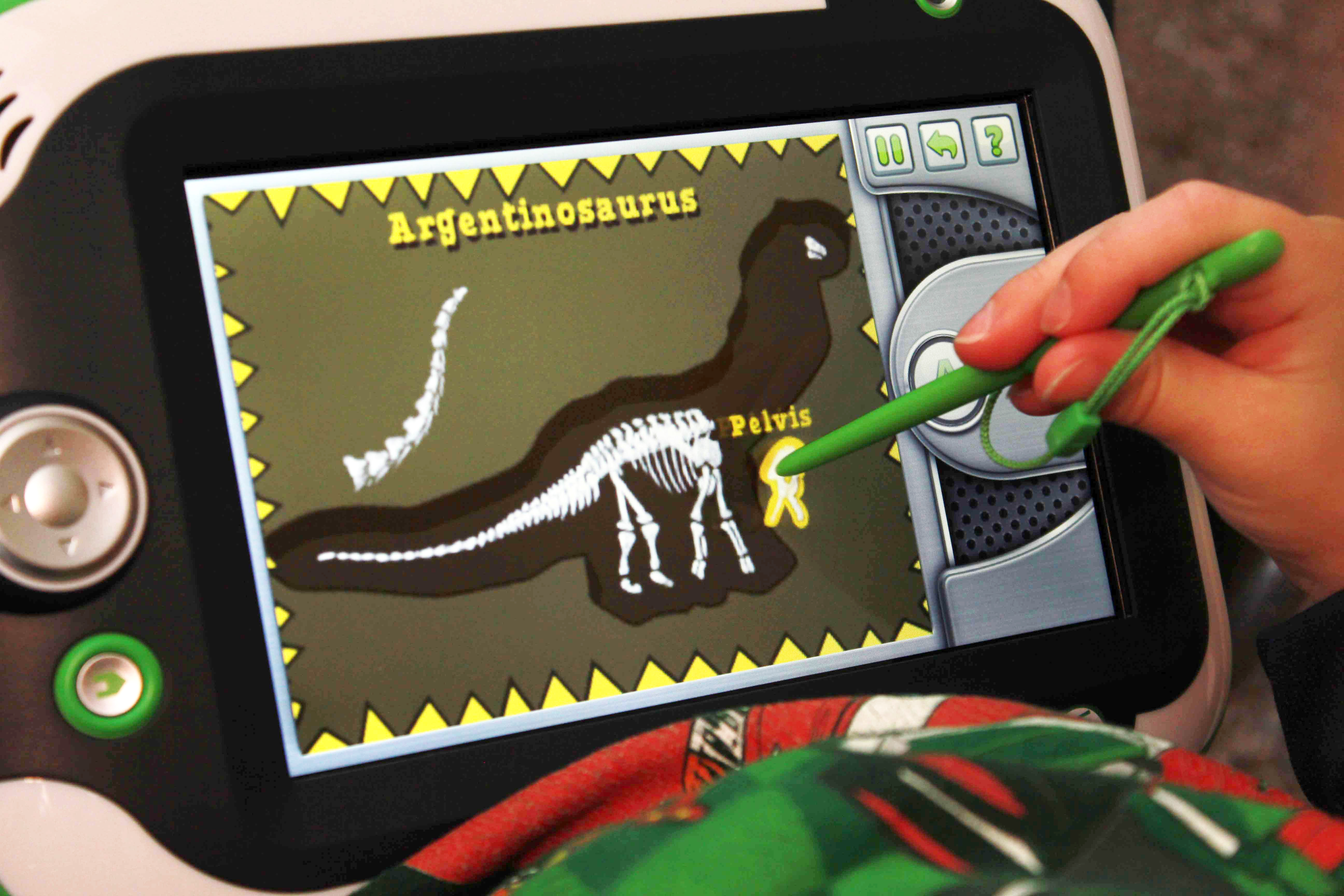 I love that it allows kids to learn about science in a fun and engaging way. I don’t feel like there are as many science games out there as there are reading and math. My kindergartner has an affinity to science, so this one was a bigger hit with her than many math or reading games—even without a Disney character embedded into the game.

The kids get to reconstruct the dinosaur skeletons, as if they were real paleontologists, and learn the scientific names of the bones and dinosaurs.

The kids learn to recognize the different dinosaurs by taking pictures of them hiding in different places. They love it. And I learn a few things just by sitting within listening distance while they play it. Have you ever heard of Argentinosaurus?

I also liked that my pre-schooler was able to keep up with the game, although I had to help him with a couple of the faster paced games. It’s meant for 5-9 year olds, but younger kids can play it too with a little bit of help every now and then.

And let’s be honest. I’m stoked that the kids are enjoying a game featuring an old school show that I used to watch when I was their age.

*Disclosure: LeapFrog was generous enough to send me this game for free when I told them I wanted to review LeapPad games for our site. BUT I’ve been a LeapFrog fan ever since I discovered them when my eldest was just a wee babe. I’ve been zealously buying LeapFrog products ever since, with my own money. So, yes, everything expressed above is my true opinion.

There Is a Solution to Ugly Flash
Tagg Pet Tracker Review