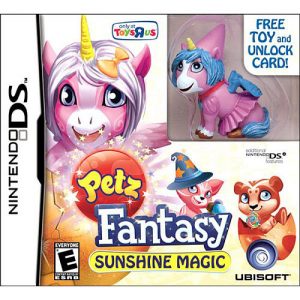 My daughter loves animals, so she absolutely loves the Petz series games for the DS from Ubisoft.  She has several different ones (most involve the word Dolphin, which if you are a regular reader of my blog you know that is no surprise).  So when I saw the press release about the new Petz Fantasy games Moonlight Magic and Sunshine Magic, I knew she would be thrilled to try them out.  Ubisoft was kind enough to send me both.

Maddie just loves when packages come in the mail for her, so when I opened the box and saw what it was I was excited to inform her that indeed the package WAS for her!  She immediately wanted to play the games.  She is 5 but is very proficient when it comes to video games (hey, have you seen who her parents are?)  The games are very similar so I’m going to talk about them like they are the same game.  It features several eggs that when you click on the egg it will hatch out a fantasy pet (like dragons, and unicorns and those types of pets).  The pets are incredibly cute, and they each have a personality.  There are three main activities you need to do to keep your pet happy.  Feed it, clean it, and play with it.  There are also several tools to accomplish this task.  If you pick the tool that the particular pet does not like, it will turn it’s nose up at you.  If you pick the food that is it’s favorite though, it will gobble it all up in one large bite!  The tasks were fairly easy to master for Maddie, and she loved playing the games.  She particularly likes to hatch new pets, and dress them up (there is a dolphin costume for some of the pets… do you think she likes to use that one??  😉 )

Don’t take my word for it though, here’s Maddie’s own words about the games…