First, let me take you through a little story.  I recently got into running.  I mean REALLY into running.  I’ve always been a person who loves solitude.  I love just being by myself and in my own head.  Now that I have children those moments of solitude are fewer and definitely far between.  Once I started running though… ahhhhhh an hour to myself in my own head, listening to music!  It started out on the treadmill I have in my garage (because it’s Utah, and I started in January.  I’m not hardcore enough yet to go running through the snow!)  Each night I’d put a movie or a TV show on my tablet and just go.  My headphones would never stay in my ears and I was constantly pushing them back in.

When it did finally get nice enough to start running outside, the headphone dilemma became even worse.  Not only was I having to push them back in my ears every quarter mile, but now I kept getting tangled up in cords.    First I tried to send the wire to the headphones up my shirt.  I was constantly having to pull up my shirt a little bit to grab the cord back down as it snuck further and further out of my neckline.  I became obsessed with trying to find the best headphones for running.  Especially for those of us with little tiny itty bitty ears.  I’d try one pair and they would hurt my ears after just a mile… and then fall out.  Another didn’t hurt my ears, but constantly fell out, I finally found some that would somewhat fit the bill in an unlikely place… they came with my HTC One.  They weren’t ideal, but they didn’t hurt and they only fell out a little bit.

Now that I had these headphones it would take me at least 10 minutes every morning to “wire” myself.  I would send the cord down my back underneath my sports bra.  Then I would have to stretch my arms to reach the cord to pull it back UP through the sports bra on the side so I could send the wire back to my sleeve.  I would pull the end of the cord out of my sleeve where it would be in perfect position to plug into my phone.  It was a process, and it was a pain.  Even this method wasn’t fool proof, as if I made the slack by my ears too loose the cord would end up hitting me in the face during the whole run (and sometimes this happened anyway if I didn’t position the cord perfectly down my back), or if I made it too tight I would have no range of motion on my head to watch for oncoming traffic. 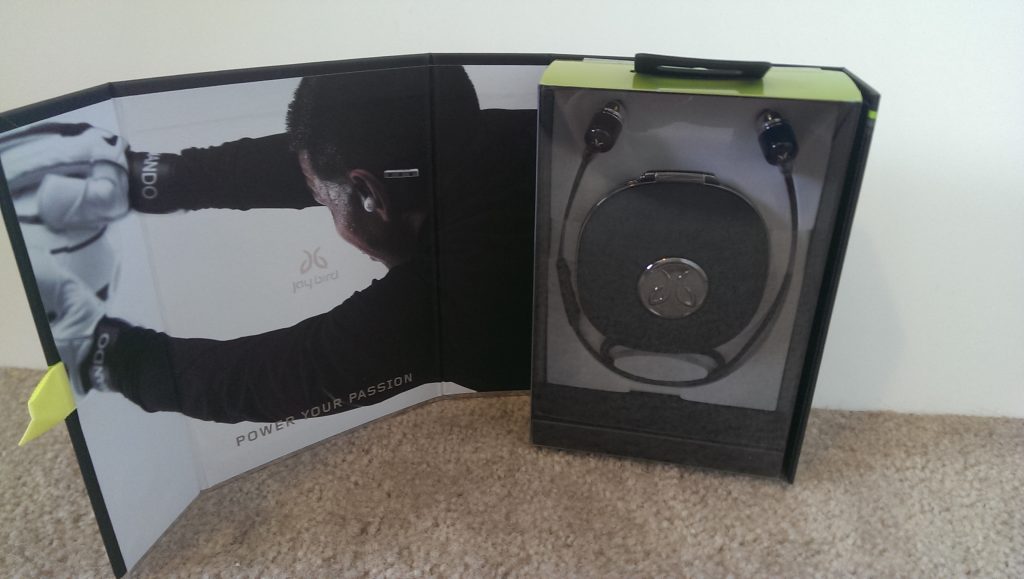 Enter JayBird’s BlueBuds X.  I attended the expo for the Utah Valley Marathon I ran a couple weeks ago when I went to pick up my race packet, which had my race bib and my shirt and what not.  There was the booth with the BlueBuds X.  I fell in love.  Not only did they have a special design that would make them extremely sturdy in the ear, they ran on Bluetooth, meaning I wouldn’t have to plug them directly into my phone!  NO MORE WIRES!!  I was so excited to try them, and they were offering a deal at the expo, that I nearly purchased them right there.  I was able to hand them my card and informed them that I REALLY REALLY REALLY wanted to try them out.  Luckily, they were totally on board!  Believe me when I say, I would purchase these in a heartbeat.

The headphones arrived just in time on Friday of last week.  I say “just in time” because very early Saturday morning I was running in my 2nd half marathon in one week (one last Saturday and one on the Saturday before).  I totally could not wait to try out these headphones… would they stay in through the whole half marathon??

Friday I was able to charge the headphones.  They say that you can get about 8 hours out of a single charge.  I haven’t timed it exactly, but it still hasn’t run out yet, and I ran the half marathon, put laundry away today, and walked for an hour on the treadmill with them on, and they are still going strong.  I also spent some time on Friday getting the fitting exactly right for my head.  I prefer the over the ear setup as opposed to under the ear because to me it felt a bit more secure for my ear type.

Once I got the fit exactly right, I synced it up with my phone.  The process could not have been easier.  I had to press and hold the center button on the headphones for about 4 seconds.  Then, on my HTC One I opened up the Bluetooth settings and found the BlueBuds listed and clicked it to connect them.  I was listening to music through them in the matter of seconds.

Throughout my entire race they sounded great.  What I also liked was that they aren’t quite noise canceling, which is definitely important when out running on the streets.  I couldn’t even feel them on my ears, they were so secure and comfortable.  It was like I was running to a playlist in my head instead of on my phone.  They performed perfectly through the entire race, and I can’t wait to run with them again.

As an added bonus, I went to do the laundry today.  I put in my BlueBuds and left my phone downstairs while I carried the laundry upstairs, folded and put it all away.  Without losing connection to my phone or losing quality on the songs.  I fear I may never take these off again.

Achieving Your Health Goals With Tech