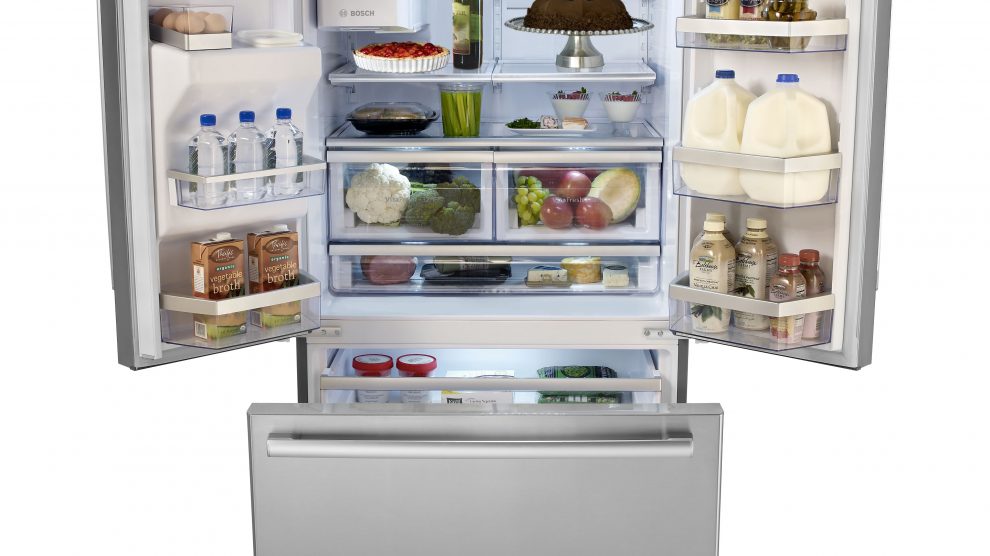 Last week a terrible thing happened. I was invited to Arizona once again to take part in a wonderful brand event put on by Bosch Appliances.  The terrible thing is that I always walk away from these events NEEDING their appliances!  I’m just fine with my trusty old fridge… until WHAMO, I desperately need a new fridge!  Not just any fridge either, a Bosch Fridge!  So I’m officially going all out with the blogging, cause I’m going to earn my way to some new appliances.  I now declare, that all revenue from my blog is going into a special savings account specifically for some brand new Bosch Appliances.  Over the next couple posts I’ll explain why, since I don’t think that just saying “German’s are engineering geniuses” is going to cut it (they are, by the way, especially our friend Manfred)

Today, it’s all about refrigerators.  Since that’s where I started in my Bosch journey on Thursday.  We went with our new friend Manfred, who is the head engineer for the refrigeration department, to the refrigeration experiments.  The experiment was there was food placed in the fridge’s VitaFresh drawers on May 4th.  The food was celery, strawberries, broccoli and apples.  Then they purchased the same food from the store that morning.  They took the food out of the fridge and we compared the two.  Almost 2 week old produce compared to brand new!  So, how did the old produce stack up?  First we tried the Strawberries.  @BusyDadBlog had a great idea to do a blind taste test between the two.  The only problem with that was that the strawberry that was in the fridge was cold, so it was obvious which was which.  Good thought though Jim!  He did say that the almost 2 week old strawberry actually did taste BETTER than the fresh strawberry though!  We started joking that Bosch makes the best refridgerators because they actually make food taste better!  We also compared the other produce items, and the celery was still crisp (no signs of wilting at all), broccoli looked great, as did the apples.

I know what you are REALLY interested in though, what is the awesome technology that Bosch has crammed into a simple refridgerator?

First we’ve got the VitaFresh drawers, which of course, makes strawberries taste BETTER!  On top of the drawer is a layer of fleece.  Yes, THAT fleece, the kind you wear.  Manfred told us that it was like “cloud cover”.  He described when you are standing in the sun.  The front of you is warm, and the back of you is much cooler.  He said if cold air was blowing directly on the produce that there would be cooler spots and warmer spots on the items.  When the air gets filtered through the fleece it distributes the air evenly throughout the drawer and makes all of the items the same degree of coolness all around.

Next, we talked about how it actually makes ice.  Did you know that when it’s making ice it will heat the tray up to melt the ice slightly so it will release from the tray and drop?  So, no, not elves as some members of my group had previously believed.

This part wasn’t so much “techy” but I thought it was awesome.  The smallish thin drawer that goes across the bottom of the fridge part is reserved for meat.  I love this about the appliance.  As you know, meat should be kept at the bottom of the fridge in case any of the juices spill out of it’s container.  Having an entire seperate drawer for these makes perfect sense.  It is also kept a few degrees BELOW freezing, which will actually not freeze the meat!

SuperCool and SuperFreeze will quickly balance temperatures between cool or frozen items and newly placed goods.  Also, being from Bosch, you can be sure it’s energy efficient and easy on the environment.

Stay tuned the rest of this week for more awesomeness that I can’t currently afford.  🙂  Which reminds me… anyone need to buy an ad on my blog?  😉

Convection Cooking Has Won Me Over
HTC DROID Incredible 2 Review