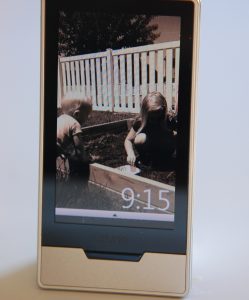 Have you ever heard of this little device called the iPod?  You may have heard mention of it once or twice.  What is not mentioned nearly as often is an mp3 player by Microsoft called the Zune.  Now, I know I’m SLIGHTLY biased, but I have mentioned that I have a iPod Nano, and I asked a few friends who have an iPod Touch some questions so I could give the Zune a very thorough review.

The Zune software was able to grab all of my music from my iTunes library, I plugged my Zune in and was up and running in a jiffy.  I did have to recreate my playlists, so that was a bummer, but I needed to go through those anyway.  It even grabbed the podcast subscriptions I had!  Once it was all loaded up I was ready to play around with my new toy. 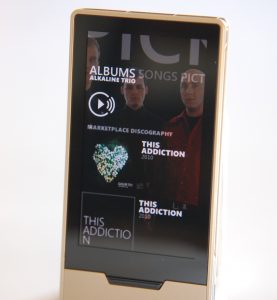 album, listen to the entire song to see if you like it and want to purchase it.  Or just stream an album that you like, that you haven’t gotten around to buying yet.  I’ve already discovered several new artists that I really like from suggestions in the Marketplace (and due to the fact I can listen to the whole song!)  Can you really figure out anything about a song from a 30 second clip?  I never could.  When you are browsing through the artists in the Marketplace, you can browse albums, songs, pictures, bio’s, and related artists (either similar in sound, someone that influenced the artist, or someone influenced by the artist).  This is a really great feature for discovering new artists that you will enjoy listening to.  The Marketplace also has apps, but there aren’t really a lot in there … YET!  I’m sure with Windows Phone 7 coming out soon the apps will get kicked up a notch.  I did load my two most important ones, Facebook & Twitter.  The other area where iPod beats out Zune is the addition of a camera.  Zune does not have a camera.

After I played with the Marketplace I checked out the radio features (which iPod Touch does NOT have).  This is where the Zune HD gets it’s HD part of the name.  Apparently there is now such a thing called HD radio.  I tuned to one of my favorite local radio stations.  I was greeted with familiar static and quality degradation as I moved the Zune around.  Then I selected the HD channel.  It was amazing.  The sound quality was awesome, and I moved the Zune around, sat on it, put it under my laptop (under all that electronic interference), and it still sounded crystal clear!

I watched a few podcasts, checked out the web browsing (over the wifi), and set my homepage to be an image of my kids.  So here is what I’ll say about the “GUI” (Graphical User Interface), it is so beautiful!  Seriously, the iPhone has been around for how long, and they haven’t had a major update to it’s GUI?  The wall of icons is outdated!  Give me access to the things I need quickly, and let me decide what the things I need quickly are.  For example, there are two main home areas.  You can swipe right or left to switch between the two.  The first one is the list of places to go (ie music, videos, pictures, etc).  The other home area is the one I use more, which is the customizable home screen.  The first item on the list is the “now playing” so you can easily go back to exactly where you were in whatever playlist or album you were listening to, even if it’s from the Marketplace.  Next is your “pins” which you can completely customize.  I have my most frequently used playlists pinned there, so as soon as I turn the device on I have ONE tap to get my favorite playlist started.  After your pins you will see a history, so if you recently played a podcast or a certain album that isn’t already pinned, you will find them quickly in the history section.  Last is the “new” section.  This will have all of the most recently added 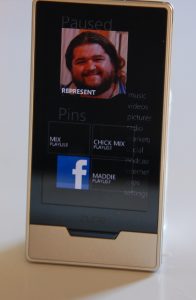 items to the device.

The last thing I’ll say about the user interface is I LOVE how it plays songs.  It displays pictures of the artist the song name as they scroll across the screen in fun patterns and directions!  Videos are crisp and clear and you can even plug it into your TV and get 720p HD!

Now that you know how much better a Zune HD is than an iPod, you completely want one, right?  Well the great news today is that Microsoft was generous enough not only to give me a Zune HD, but to let me give one away too!!  That’s right, this weeks giveaway (I hold a giveaway every Monday on awesome technology products) is a Zune HD.

To enter to win the Zune HD simply leave a comment on this post!  As always, there is only one entry allowed per person.  The giveaway will go through Sunday, Sept. 26th at 8 PM MST.