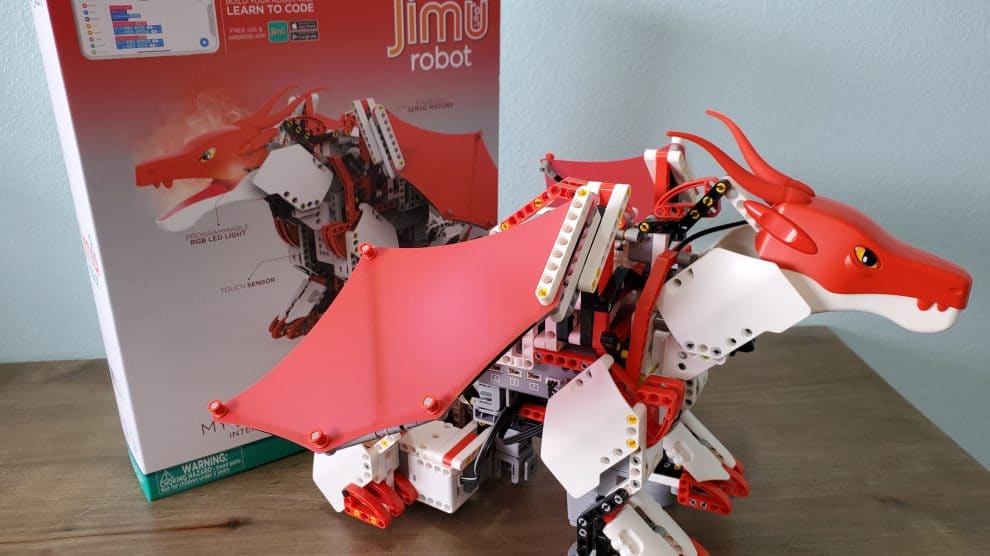 
Thank you UBTECH’s JIMU Robot for sponsoring this post. JIMU Robot kits are a fun way to bring robotics into every kid’s day to day. The system relies on three steps: Building, Coding, and Playing. Robot kits from UBTECH offer a wide variety of challenging builds for the curious children in your lives. With JIMU Robot, kids 8+ can engage in STEM learning with their award-winning interactive robotic building block system!

My children love to build things, love to code, and LOVE to create stories and role-play featuring fantasy characters. To say that STEM is a common theme in this house would be a huge understatement. Both of my children love to play with robotics and learn new things they can code. My daughter is especially obsessed with Dragons. We laugh that literally anytime a dragon appears on ANYTHING she shouts “dragon!”

Her room is completely decked out with dragons and she has made many stories featuring dragons. When we saw the new JIMU Robot: FireBot Kit, from UBTECH Robotics that can be coded to breathe fire and move around the house, we knew we must have this in our home.

Not only would my kids love the dragon itself, but they’d would love the coding aspect of the toy since he is obsessed with coding! This was the perfect toy to bring both kids’ interests together and allow them to spend some quality time together.

When the toy came in the mail, the kids were super excited to put it together, TOGETHER! They worked closely until they had the whole thing built. It took a couple of hours from start to finish, but we weren’t able to get it all done in one day.

In order to put the FireBot together, you need to download an app from either the Google Play store or the Apple App Store. The app will take you through the steps one by one, and even allows you to spin the 3D model around so you know exactly where each piece goes. This ability to interact with the model was essential in helping them figure out how to put it together correctly.

I only had to intervene with the building process twice. Once they had put the wrong length of a rod in the wrong spot, and the second was when they put the dragon’s head on the body slightly twisted so it wouldn’t actually open and close its mouth properly. Other than that, my kids built the entire thing themselves, with my 10-year-old doing a lot of the work after his sister had to go to Volleyball practice.

Once Jimu (that is what they named him) was put together, my daughter created an adventure story for him! They acted it out a few times and decided to video record the story! Here is the video they created…

The robot itself is really fun to interact with as well. It can breathe fire (as seen in the video), but it can also breathe “ice” or really any other colors you want. The controls are very responsive, and there are a ton of things you can make your FireBot do.

I love watching the FireBot flap its wings and drive around the house. My son loves to code the FireBot’s mouth to breathe different colors. My daughter has already started writing another story for them to act out! She is calling them “Jimu’s Tails”. What can I say, the girl loves her puns.

Really though, the kids enjoyed putting it together and seeing how they could build something SO COOL. It really helped them develop their love for STEM, especially for robotics and coding. They can clearly see how different parts interact in order to create a moving, breathing dragon!

You can purchase the FireBot in the store at Target or online at Amazon.com, BestBuy.com, Kohls.com, Samsclub.com, Target.com, Walmart.com, and ubtrobot.com. Definitely something to put on your holiday list!