I had never thought much about purchasing a specific streaming device for my home.  We have satellite TV, we have an xbox, Wii, Playstation 3, and a Blu-Ray player that ALL have streaming capabilities.

My daughter’s room has a Blu-Ray player, that has internet apps so it can play Netflix and such.  She LOVES the Land Before Time movies.  I mean LOVES them, ALL 100 of them.  We don’t own any of those on DVD, so when she wants to watch one, we need to stream it from Netflix.  My daughter’s room is in what I like to refer to as a wireless network black hole.  Many times as the movie starts, we have what my daughter refers to as “sounding like a fan”.  The streaming is having difficulty so the sound on the movie sounds like the characters are talking through a fan.  The movie will also pause frequently while it is streaming, and the quality is never that great.   Which, when I’m downstairs trying to get some work done, is quite annoying, as my kids continue to call for me to help fix the movie.

Enter my new best friend the Roku 2.  As a streaming only device I was nervous about how it would fare in the wifi black hole of my daughter’s bedroom.  I am happy to report, that not only was the audio perfect (aka NOT sounding like a fan), but I was able to stream an episode of LOST in full HD!  Even the initial loading of the show seemed to be faster than on the Blu-Ray player.  This little device is perfect for areas in the house you want to put a TV, but don’t necessarily have a cable connection.  My house is not wired very well.  There is one cable connection in my room, and one downstairs.  Anywhere else needs a different solution, such as my husband’s office, my daughter’s room and my son’s room.

Having a streaming device like the Roku 2 for a child’s room is the perfect solution.  First they won’t be using the DVD discs, which as I’m sure you know, kids can completely destroy.  Plus the device is so responsive, that it is not difficult for them to get to exactly what they want to watch.  The remote is even SO easy that I was looking through my email the other day and it asked me how the quality was on a show I’ve never heard of.  I realized that my 2 year old had put the show on, all by himself!  Which leads me to my first issue with the device…

It has a lack of parental controls.  I’d like to be able to control access to specific types of Netflix movies and shows or even specific channels within the Roku (I’ll tell ya more about the other channels in a minute).  I’m never that far away when they are watching Netflix, but I’d like to have the peace of mind that anything they select to watch will be OK for them to watch.

Didn’t I say something about channels?  Yes, yes I did.  Netflix is only one channel in Roku’s lineup.  First up is Hulu Plus, so you won’t even miss having cable or satellite.  You can stream all of the latest episodes of your favorite shows in HD!  Want access to even more TV shows and movies?  Roku answers the call with a channel for Amazon Instant Video.  Who needs a trip to the Redbox or access to Pay Per View when you can pick from an endless selection of new release movies and TV shows.  With an Amazon Prime subscription you will have access to thousands of movies and TV shows for a low monthly subscription rate. Roku also has Pandora so you can stream music through any TV in your house.  Having a Christmas Party?  Set the mood by streaming a Christmas music channel through Pandora, with full access to your surround sound.  There are so many other channels to choose from, just take a look at what channels the Roku 2 has to offer you!

Angry Birds on the Roku 2 XS is nothing short of awesome.  You use the remote control to pull that bird back and launch it into the pigs waiting on the other side.  It worked extremely well, and the ability to play Angry Birds on my 60 inch TV was so much fun!  The Roku 2 XS comes with Angry Birds for free!  This channel also kept my children very well entertained, since it was so easy to use, they had a lot of fun, and did not get frustrated. 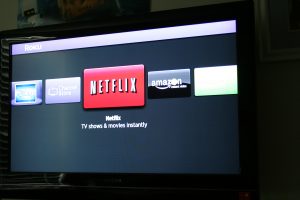 The last channel I wanted to talk about was the Disney Channel.  As a mother, I was hoping that this would be a lot more robust than it currently is.  There are short clips in the various areas of the channel.  There is nothing from Disney Junior, such as Mickey Mouse clubhouse, which definitely would have made my children’s day.  Instead there were areas for the older kid type shows, and short clips for the Muppets and other things.  Basically, it was the short “commercials” that occur during the shows on the real Disney channel, which I didn’t think was very helpful.  I would love to see full episodes of the Disney Junior shows, and maybe even some great old school Mickey Mouse cartoons!

My last gripe was that the Roku 2 did not work through my HDMI selector.  I have a lot of components attached to our TV downstairs (remember the list from the beginning of this post?)  In order to keep it all connected to our stereo receiver and then to our TV, we needed more HDMI ports.  So we have an HDMI system selector to get everything plugged in.  When I put the Roku 2 in the selector it did not come through to the TV.  I plugged it straight into the TV and it worked beautifully.   Since we have hard wired streaming capabilities on that TV, it wasn’t a huge deal.  Also, since it works so well up in my daughter’s room, it REALLY wasn’t a huge deal.

I am definitely a convert to this little streaming device.  If you were to cancel your cable or satellite today, and use that money towards the purchase of a Roku, you could eliminate 50-100 dollars a month from your budget!  With a Netflix, Hulu and Amazon, you will never be lacking in the content you want to watch for much cheaper!  You could be finished with the “100’s of channels and yet nothing is on” problems!

Disclosure: I was given a Roku 2 XS to facilitate my review, but received no further compensation for this post, all words/thoughts/opinions are my own, and was not influenced by the good people behind the Roku.

How to Layer Your Parental Controls

Give Oh Give Away
Security on Your Smartphone