I’m in a parenting Facebook group, and I constantly see parents struggling to manage and monitor iOS devices. Why I hate Apple products aside, buying iPhones for kids is just not a good idea. I’ll let you know why.

While Apple is definitely making some strides in this area with its new Screentime features, it is still incredibly far behind the curve when it comes to parental controls. With the built-in controls, you are able to set time limits on apps, restrict the ability to download new apps and get reports on what apps your children are spending the most time on.

What you CAN’T do is get reports on what is going on inside those apps. For example, the Boomerang Parental Control app for Android devices can tell me specifically what videos my children are watching on YouTube and what they are searching for on Google and what is going on in their Snapchat and Instagram accounts.

The reason this ability is limited in iOS is that Apple prevents 3rd party apps access to the areas of the phone the parental control app would need in order to report properly. Apple wants you to use only their internal systems and locks out the ability for anyone else. They do this in the name of functionality and privacy, but they really aren’t taking parent’s needs into consideration when making these decisions.

iPhones for kids are expensive

It’s no secret that iOS devices are expensive. Just like you wouldn’t purchase a brand new 2019 car for your new 16 year old, you also shouldn’t purchase an expensive phone for your 12 year old. They will absolutely break their phone at some point. Getting them a cheaper Android phone will help ease them into taking good care of these devices. I honestly don’t know a child who doesn’t have a cracked phone screen.

Lately, I’ve seen a lot of parents complaining about the built-in Screentime parental controls for iOS. For some users, there is a bug that will allow your kids to continue to extend their time in 1-minute increments.

There are also complaints about updates completely resetting the parental controls and screentime settings and not finding out for days later while your child has had access the entire time. I’m not saying that any system won’t have its issues. There are ways kids get around parental controls everywhere. However, only being able to rely on the built-in controls is just asking for disaster to strike. I am a huge fan of layering on different controls, and with iOS devices, it’s just so much harder.

So, honestly make your job as a parent so much easier, and skip the iPhone until they are much older and ready to monitor themselves. NEVER give an iPhone as a first device. If they complain about getting an Android device instead of an iPhone, just remind them who is paying for the device and the service. You would be happy to not give them a device at all.

Remember, you don’t have to use an Android device as well. You can manage the parental controls you’ve put in place from your iPhone, but I mean… why would you? Seriously, Android is so much better. 😀

Sarah Kimmel is a digital parenting coach and family tech expert. She has spent the last 16 years of her career as a Microsoft Certified IT Manager supporting over 100 small businesses. During that time she started Family Tech LLC to help families understand and manage the technology in their home. She has regularly appeared as a family tech expert on KSL News, BYUtv and Studio 5, and has been invited all over the world from tech companies like Lenovo, Verizon, Microsoft, Dell, and Samsung. Find out more on her website SarahKimmel.com 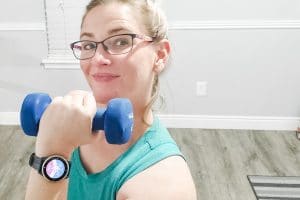 The Only Diet That Has Ever Worked For Me!