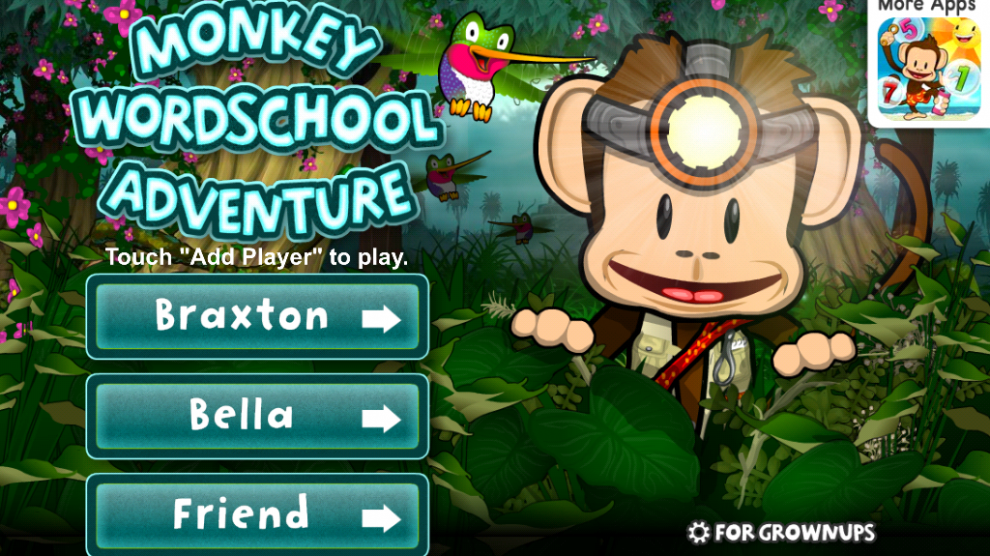 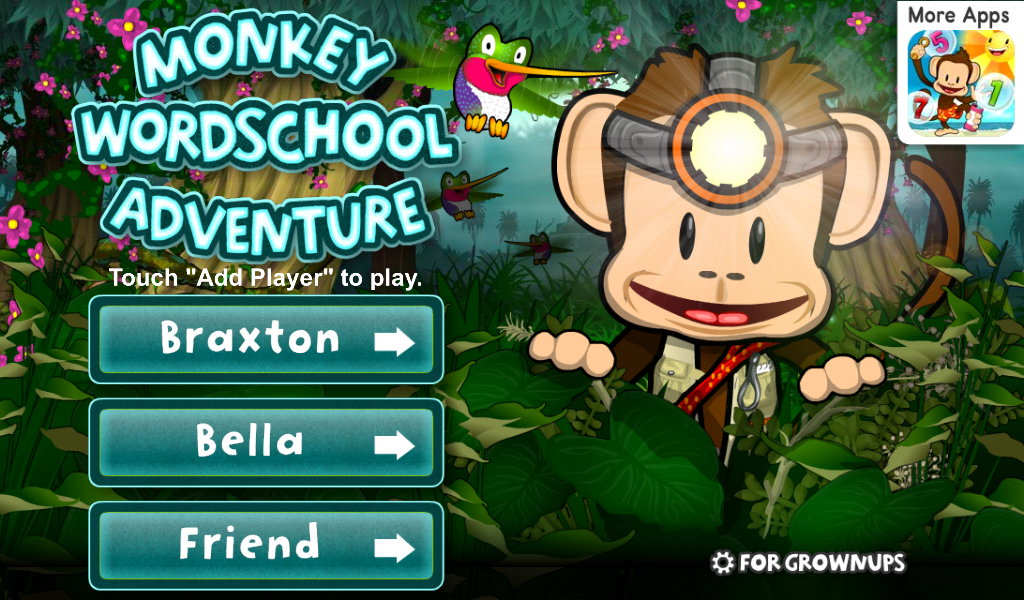 There are a few things that I really dig about this app. First and foremost, the graphics are beautiful, especially for a kid’s game. It stars a monkey who guides your kid through a bunch of word adventures (read: games) and collecting plants and creatures at the end of each level to add to your kid’s terrarium (pictured below). 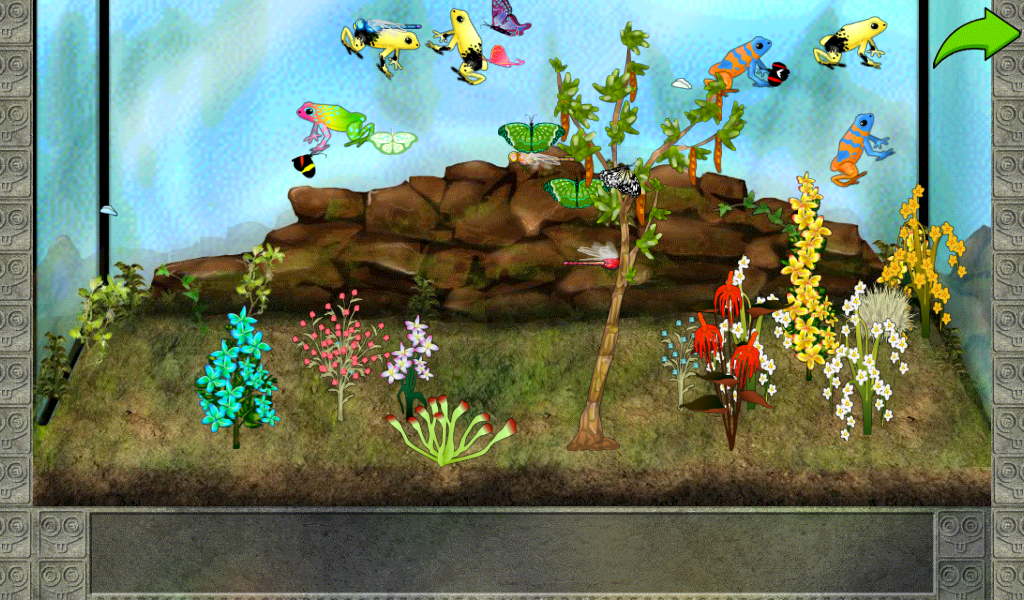 Who’s it for? It’s for kids ages three to seven, and as you might have inferred from the name of the app—Monkey Word School Adventure—it focuses on words, reading, writing and phonics skills. I have a four year old and a six year old and both of them really enjoy this one. In the beginning, however, they both got frustrated figuring out how to do each game. It’s definitely worth the few minutes it takes to sit down and play with them until they’ve got it down.

With kid’s education apps one basic need is to have the ability to create separate profiles for separate kids, and within those profiles the game adjusts difficulty levels according to the kid’s skills. Monkey Word School Adventure meets this need. There are three skill levels for each game. As the parent you can go into your children’s profile settings to manually set the difficulty level, or look to see where the game has set them according to their track record.

What games are there? There are six games which I’ll show you below. 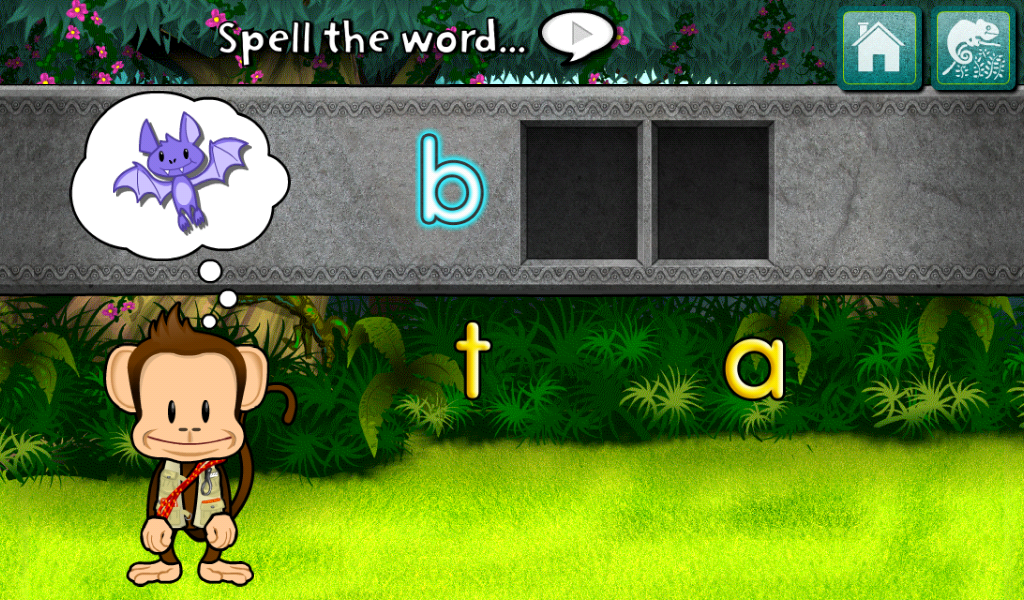 In Spelling Stone the kids are given a picture and the scrambled letters that spell out the word in the picture. They put them up on the stone in the right order. It’s a good phonics exercise as long as the kids know exactly what word the picture intends for them to spell. This is a good time to teach your kids to use the play button at the top which will say the word they’re supposed to be writing. 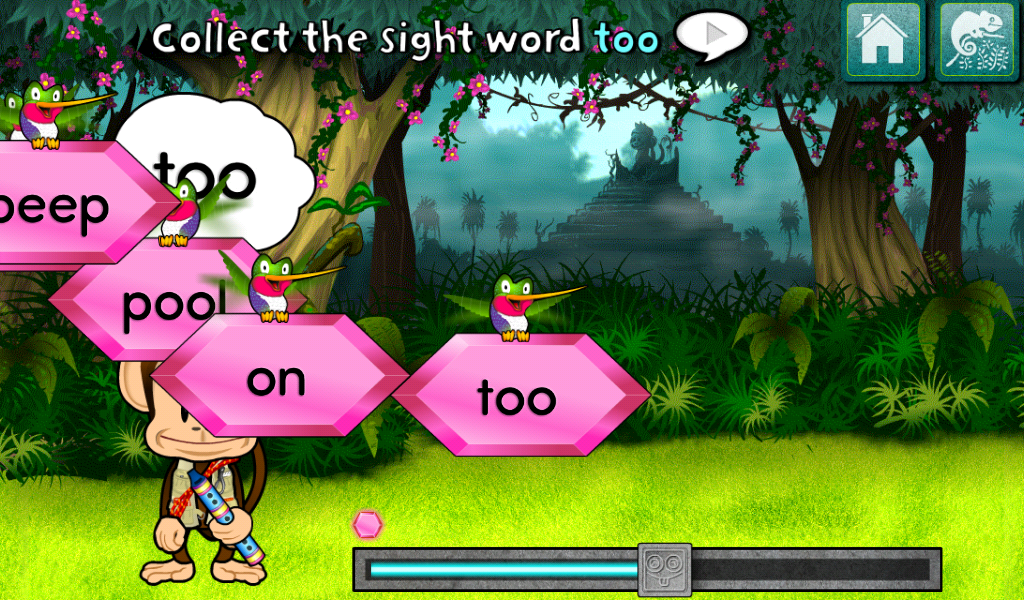 Sight Birds is a faster paced game where they are given a specific word that they watch for. Birds swoop in carrying gem stones with different words spelled on them. The kids are supposed to tap only the gem stones with the word they were looking for. Great way to teach the kids to recognize certain common words on sight. 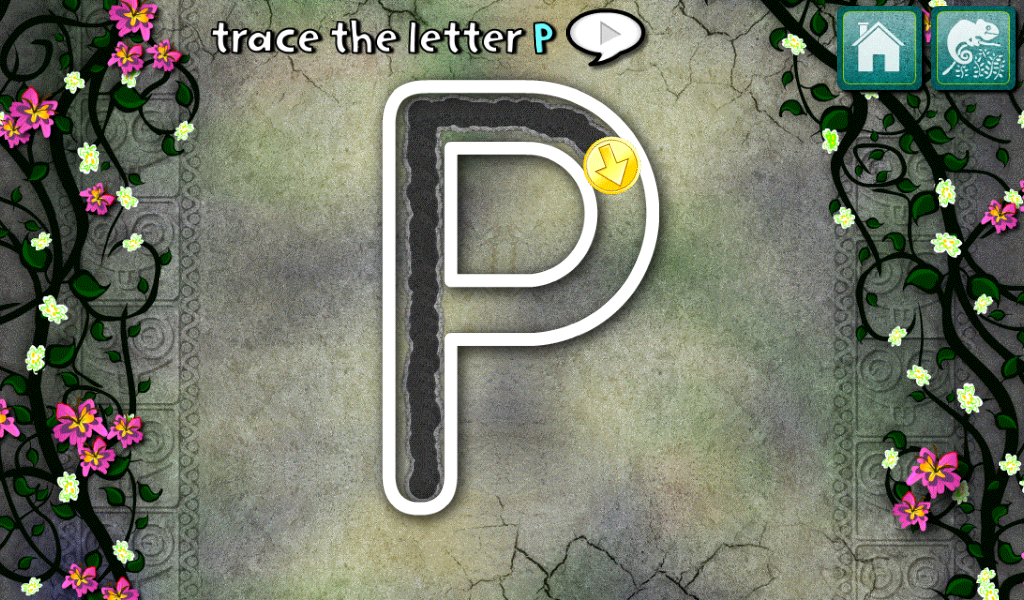 Letter Writing allows the kids to engrave a letter in the stone with their finger. Something that caused a few tantrums in my house is that they are required to trace it in the specified way that children are taught to write the letters in preschool. My kids have picked up a few bad habits, so it won’t always allow them to write the letter the way they want to. The good news is that it shows them step by step how to do it to help correct those bad habits. 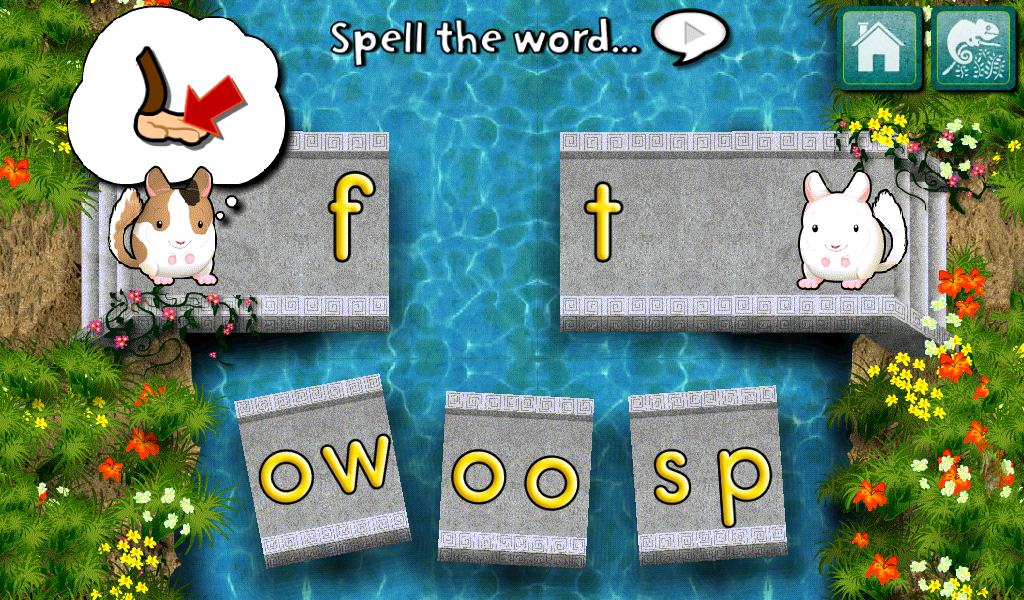 Phonics Bridge has a word written across the bridge with two chinchilla friends on either side. The bridge is broken, thus leaving a few letters missing. The kids have to drag the bridge piece with the correct letters back into place to let the friends cross. They know what the word should be based on the picture at the top of the screen. 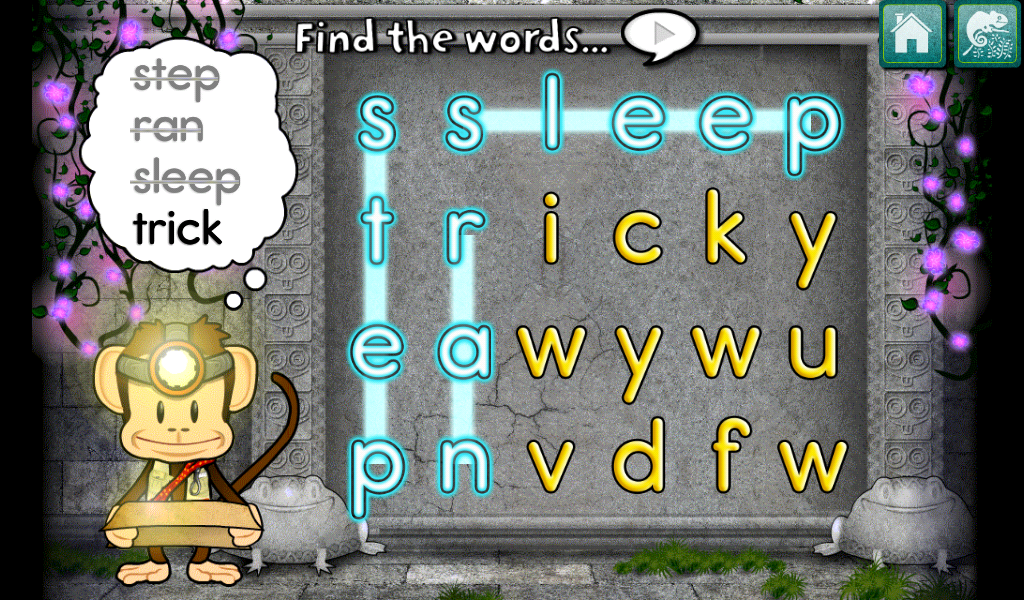 Word Wall looks like an archeologist dig, which makes the word search a little more exciting. Find the words on the list to win the game. 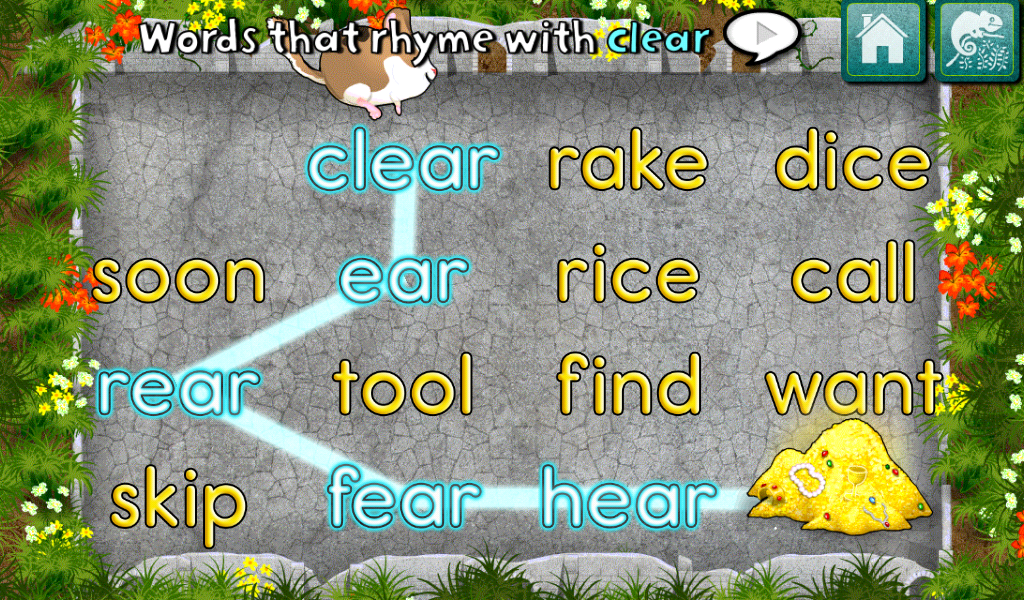 Rhyming Maze is the game both of my kids have the most difficulty with. I’m not sure if it’s because I didn’t read them enough nursery rhymes, or if this game is just a little more difficult to grasp. Anyway, the kids have to make their way through a word maze by following the trail of rhyming words.

Overall it’s a great wholesome game with engaging activities that teach your kids literacy skills, plus it’s has high quality graphics. Most importantly there are no in app advertisements or purchases. THUP Games, the developer, has lots of other games as well starring their favorite monkey. If this game seems a little advanced for your child, try one of their other games for toddlers.