We are a big gaming family.  We have all 3 game systems (Xbox, PS3, & Wii), not to mention the computers we have at home.  My husband is definitely more of a gamer than I am.  I have a very hard time with hand-eye coordination.  As soon as my brain registers the color I’m supposed to push, the game has already moved on to the next one.  I do have a couple of favorite games though.  SSX is a snowboarding game that I ADORED, and Kingdom Hearts is a RPG (Role Playing Game) based on Disney and Final Fantasy Characters, which I also completely loved.  Neither of these games have been released on the next generation consoles though, so I haven’t played either in a very long time.  Then of course there is the classic Super Mario World for Super Nintendo.  We have that game downloaded to our Wii.  I also enjoy games like Mario Party and the Mario and Sonic at the Olympics type games.  Other than those few I don’t actually play video games very much.

My husband on the other hand is a full on gamer.  My favorite is when he tells me that such and such game is coming out and he’s going to HAVE to buy it.  It’s the “have to” that cracks me up.  Like the world is going to end if he doesn’t get to play this game as soon as it comes out.  Luckily he will usually sell games he’s already beat in order to purchase the new game.  Gamestop practically knows him by name. 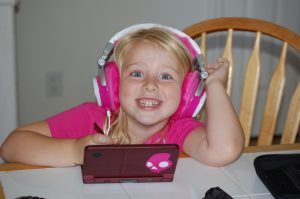 Since he likes to play games so much, our daughter has also inheirtited this trait.  She LOVES to sit and watch him play a game.  She is always asking ME to come play games with her.  She has a computer, our Wii and a DSi.  Some of her favorite games are first, ANYTHING Mario related.  She LOVES Bowser, and Yoshi.  She also likes to play Petz Dolphins, she is obsessed with sea animals, and so of course that game is right up her alley.

So how do I pick games that she will be able to play, and that will be interesting to her.  I did a Google search for DS games that are good for a 4 year old.  Then as I’m going through the list I’ll pick out things that I know she’d like.  I wouldn’t buy her a game that had princesses all over it, since I know she has no interest whatsoever in princesses.

Games have ratings.  Make sure you are purchasing games for your kids that are the appropriate rating!  My husband works for a big box retailer, and is constantly amazed at parents buying mature rated games for their 7 year old kids!  This is what really bugs us about how many people view video games.  People get all up in arms about how some video games are destroying our kids… but we ask WHO are the people allowing them to own and play the games?  Get involved with what your children are doing!  My husband’s mom would sit down with him and listen to any new CD that he got so she could see if it was OK for him to listen to!  THAT is involved parenting!  Hubby will be ringing up a customer that looks too young to buy a Mature rated game, and ask for their ID.  They just yell over to their parents and the parents come over and buy it… without a question as to what it is, and why the store would need their approval for the game!!

Not only do the ratings help with avoiding games that are inappropriate for your kids, they help with picking games that ARE appropriate for your children.  A 4 year old can easily navigate a “Early Childhood” rated game, but may have trouble with a game rated E for Everyone.  The ESRB has a great website that can help you check out games to purchase for your kids http://www.esrb.org/ratings/ratings_guide.jsp.

Aside from the console games, there are SEVERAL free games on the internet for kids to play.  We love Kidrocket in our house.  It limits the websites to only the ones specified by the program (which included all the ones we wanted to go to anyway).

So again, the philosophy in my house is to let our children enjoy games and gaming (since we do too).  We believe, though, that the right way to do it is to get involved with your kids.  Play the games with them at first (it helps them understand how to navigate the game, and gives you a chance to check the game out to make sure it’s ok for them to play.)

Don’t forget to check out my Twitter party tonight, where we will be discussing kids and entertainment.  I am giving away a Logitech Harmony 300 during the party, so you definitely don’t want to miss it (plus there will be great info and discussions about TV/Movies/Video Games and our kids!