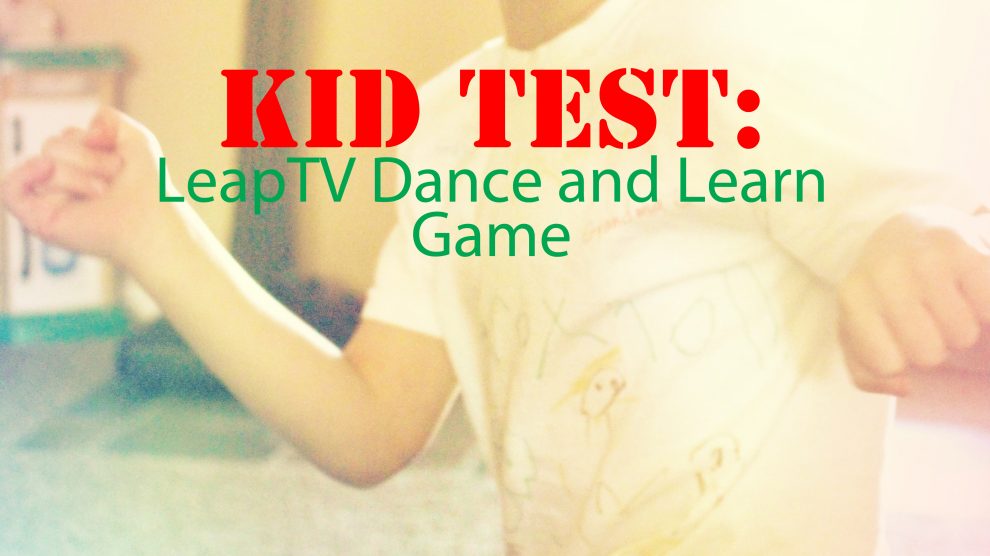 I’ve chatted before with some of the people in charge of product development over at LeapFrog, so I know they go through many phases of kid testing before they send anything your way, but how do the games perform in the real world? I’ll tell you what my own kid testing has unearthed with the Dance & Learn game for LeapTV.

What does Dance & Learn do?

There are a bunch of different LeapFrog characters, and each set of characters has a specific game they do with your child. The menu shown above shows all eight game options.

The Stretchy Monkey game, shown above, tells the child to grab the fruit fitting the description (small, wide, striped, yellow…etc.). In another game with a different character (don’t remember which one) you find the letter that is facing the wrong direction.

There are two different dinosaur games. In one of them the dinosaur tells you to jump, soar, sway, all that good stuff. In the other dinosaur game it sounds out words for the kid—one letter at a time-and asks the child to choose the correct picture. Another game asks the child to create compound words…there are a bunch more games, and as your kid passes off levels they become more difficult, but that’s the gist of it.

After the challenge comes the real fun, and each game has a different reward activity. Stretchy Monkey lets you catch all the falling fruit, which feels a lot like Fruit Ninja (one of my kids’ favorite tablet games), except instead of swiping a touchscreen with a virtual machete, they get to use any and all appendages to hit the fruit. The dinosaur lets you catch the stars, freestyle dance shows glitter and sparkles whenever you move. The kids usually like the reward activities the most, not that the learning games aren’t fun.

By the way, the camera shows the kid on the TV screen as they play (as you can see in the pictures above and the video below). I don’t know about your kids, but mine will sit there and record themselves talking about nothing on their tablet cameras, and then play it back to themselves all day. Good call putting the kids on the screen, because nothing keeps their attention like themselves.

How well does Dance and Learn work for my kids?

Here’s an actual video clip of my preschool aged son playing for a couple minutes.

Basically, the kids have lots of fun and the frustration is minimal. You might have noticed in that clip that my four year-old moves pretty slow during the challenges as he chooses his answers, and the reasons are two-fold. It’s partly because he’s still getting used to selecting his answer by watching where his hand is on the TV screen, and the other reason is because if any part of him (elbow, shoulder, head…) touches any of the options then the LeapTV will count it as his answer, and he doesn’t want to touch the wrong answer by accident. I’ve also seen him get around accidental selection by crouching down below all the options, creeping until he’s beneath the right answer, and then POP up to hit his choice with his head. That works too.

Dance & Learn advertises that it’s meant for ages four to seven, and as you can see my four year-old was able to play with minimal difficulty. My six year old loves this game. Using their body to choose the answers, I think, keeps the kids engaged longer and the reward activity makes it lots of fun while getting the kids active.

Now, after saying above that the game can be really sensitive to motion when selecting answers (sometimes it counts it as an answer when someone else within the range of the camera moves too), there are moments when the game doesn’t respond very well. This is when the kids get frustrated. My son will very, very carefully grab or touch his answer and sometimes it doesn’t register, even when he starts wiggling his hand around. Luckily, those occasions are rare.

What does Mom think?

As a mom, I find that the activities are helpful and educational, and they actually do get the kids dancing and having fun, as evidenced by my son’s killer dance moves. I’m pretty sure he inherited them from his dad. I’ve seen real video footage of my husband doing eerily similar moves to Michael Jackson when he was about that age.

All in all, this game gets a pass from me. It claims to be fun, educational, and physically active for kids ages four to seven and that is exactly what it does for my kids.

*Disclaimer: although I received this game for free, these are my true and honest opinions. I swear.