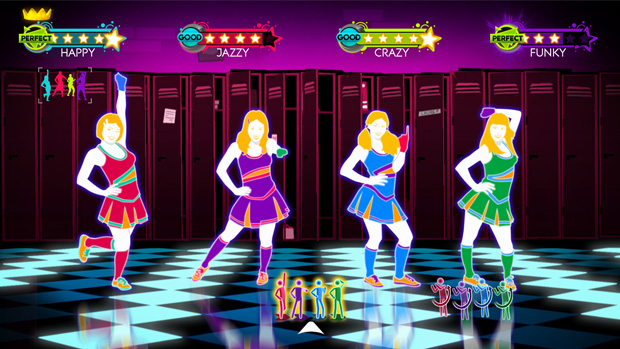 From my Gamer Husband:

My copy of Just Dance 3 for the Kinect had been sitting on my table for a few weeks now, and for some reason, today was the day that I decided to try it out.

Just Dance 3 gets you right into the action, er, um dancing. There really isn’t anything to set up, except number of players, difficulty, and song choice. Once you get yourself ready to go, it’s dancin’ time!
I started my dancing adventure with A-Ha’s “Take on Me”.
I found myself looking like a complete idiot playing this game.
Not because Just Dance 3 was difficult, but because I’m out of shape and I don’t have the skills comparable to contestants on So You Think You Can Dance.
After a failed attempt to simply flail my arms about and hope to quickly get through this song before my wife sees me, I humbled myself and decided to start over and really try again. 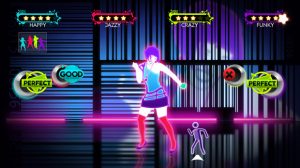 Just Dance 3 offers two ways you can dance:
– Simply watch the animated dancer and try to mimic the moves
– Watch the dance moves that scroll from the bottom right of the screen
The animated dancer changes looks and dance moves based on what song you choose. For example; my dancer was straight out of The Breakfast Club or Footloose, and by Footloose, I mean the semi-decent one with Kevin Bacon.
I started the game on normal. I thought if I tried a different level, then I might get a visit from Mary Murphy and have her scream her head off in excitement.

The game is pretty fun.

I decided to bring on my 6 year old and we did a duet. I let her pick the songs, which in hindsight wasn’t a good idea. With the vast song selection Just Dance 3 offers, there are going to be a handful of songs the might not be kid-friendly in the lyrics department. (“Forget You” and “Lollipop”).  There were no bad words, but just the rest of the lyrics were extremely suggestive. 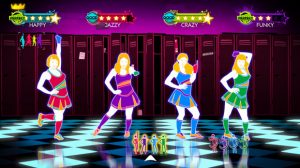 I would suggest picking up Just Dance Kids 2 for the Kinect, or either Just Dance Kids for the Wii. Though it has “All Star” from Smash Mouth, and nobody likes that song.
Other than that, the gameplay was smooth and easy to learn. I enjoyed dancing with my 6 year old, until she wanted to break up the team and go solo.

Key Features
Top Of The Charts
Over 45 all-new tracks, ranging from Billboard/top-charted hits to classic dance party tracks! There’s something for all tastes, everyone will find their groove. Want more songs? Download from an expanding catalogue of new tracks from the Xbox Marketplace.

Dance Crew
For the very first time on Kinect , you will be able to pull your moves with 4 players simultaneously.  We did run into a few issues with this during the Dance Party discussed below…

Just Create
Just Create puts you into the game by making you the Star! Bring out your dancing shoes and dance moves because the Kinect Exclusive Just Create mode puts you on center stage.

This innovative mode allows you to choreograph and record your own dance routines right into the game.

Challenge your friends and the Just Dance community to your routines by uploading it online for other Just Dancers to download, vote, and play on their own console with Just Create!

Top Score Challenge
Rank on leaderboards with your friends in the all new leaderboards system. Compare each other’s score on each song to see who’s the best dancer.

Just Sweat It Out
Just Dance is not only fun but it can be a workout. Accumulate sweat points, feel good, and Just Sweat.

Shout Out!
Give your sweet dance moves a voice with the Kinect-exclusive feature that lets you belt out your favorite verse for more points and total party fun.

I was picked to have a HouseParty of Just Dance 3, and I invited all my girlfriends over to participate.  I have to say, that most of my friend’s husbands love when I have them over to my house, mainly because they come home and ask their husbands to pick up electronics that the husband has been asking to purchase for months!  Of course this time they all came away wanting to purchase a Kinect (which also required the purchase of an xbox in most cases).  My friends and I played Just Dance 3 and Just Dance Kids 2, and then I also showed them a little of Your Shape Fitness Evolved (all titles by Ubisoft).  My friends and I had so much fun that we decided to include the girls ages 12-18 in our church group later in the week to have a dance party as well.

The only issue we really ran into, was sometimes the Kinect would lose a player, so all of their moves stopped being recorded and they lost points.  I noticed this happening mostly when the dance would have people change positions or move around each other.  Plus in order to get all 4 people in the Kinect window they would have to stand fairly close to each other.  Mainly this only happened when there were 4 players.  Plus we had a lot of background motion, so that could have also been a factor.

Over all we had a TON of fun.  The adults and kids loved the song selections.  There were enough recent songs to keep today’s kids happy, and plenty of old school songs for us adults.  It’s a total workout, which is important for both adults and kids!  It’s really cold up in Utah right now, and we even had to open a window in my house because we started sweating!

At the Girl’s Night In party we decided to give Just Dance Kids 2 a try, as a lot of us were pretty uncoordinated.  We did the Instanbul song from They Might Be Giants, and it was really fun.  Although the kids on the game have creepy smiles all the way through the dances.  The moves are really easy for kids to pick up, and it has some great songs (like the REAL Lollipop song instead of the one on Just Dance 3 that wasn’t what I thought it would be).  They have songs from Yo Gabba Gabba, the Wiggles and much much more!

Overall, I had SO much fun playing both games.  They are great games for parties or just for when you want to get in a super fun workout (that really doesn’t feel much like a workout because it’s so much fun to do!)  Great job again to Ubisoft on some great Just Dance titles!