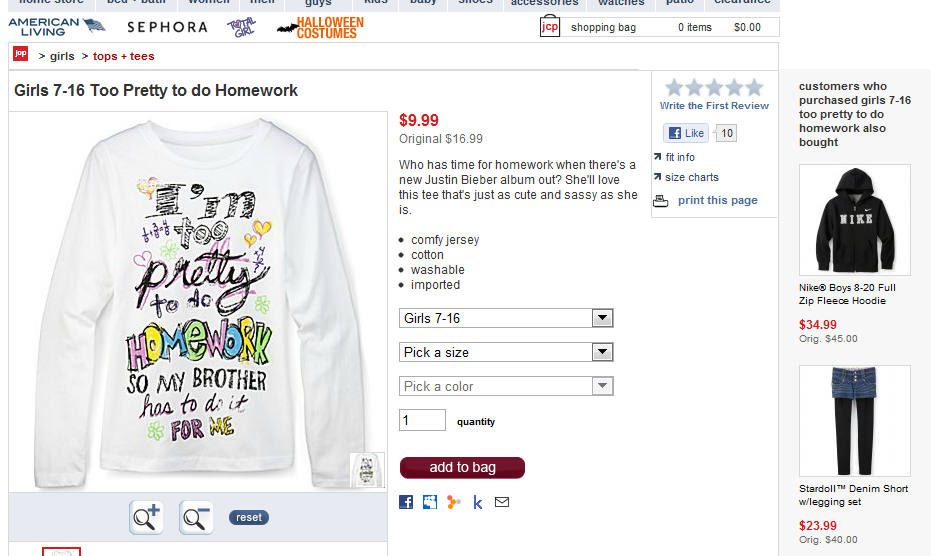 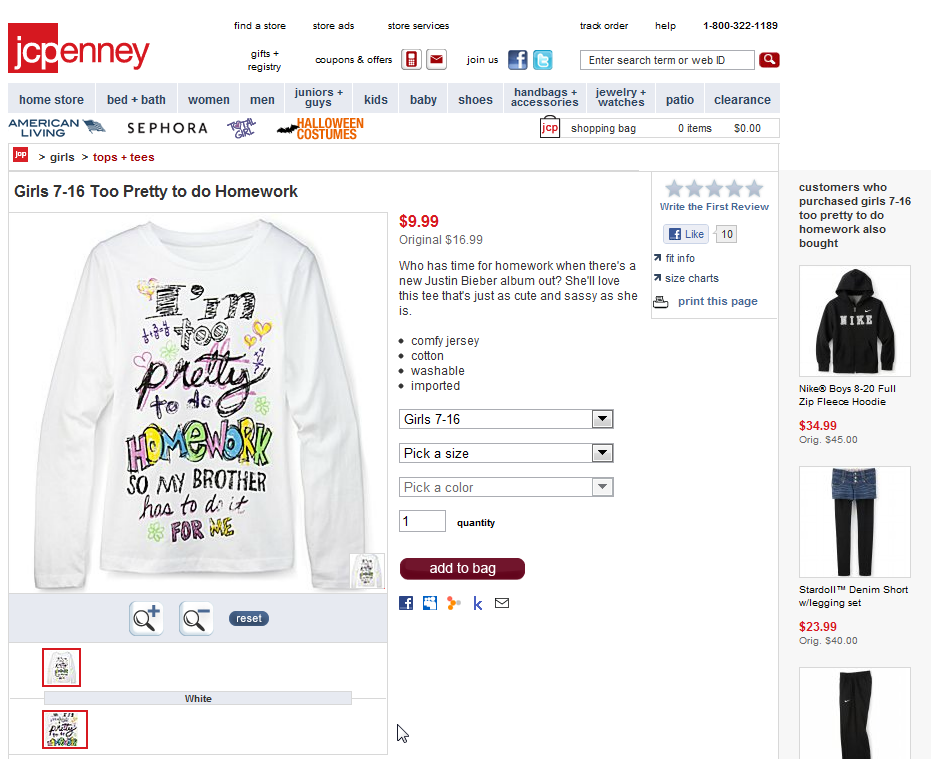 The social media world I live/work/breathe in was all a buzz this morning because of a T-Shirt.  The shirt (pictured here), which says “I’m too pretty to do homework, so my brother has to do it” made a whole lot of people mad, including myself.

Some people were upset, like me, some people were indifferent, and some people defended JCPenney’s right to sell whatever they want.  First, I was mad.  I don’t get too upset about companies in general.  Like I don’t agree with the people who get mad that THEY purchased a Mature rated video game for their kids.  If they bought it for their kid, it’s their fault, not the video game makers.

I was mad about the horrible message this shirt sends to our girls.  The self-esteem issue is the first problem I have with it.  That you have to be “pretty”.  What about those girls that don’t feel pretty?  I don’t know what my parents did, but my sister and I have excellent self esteem.  I am trying to do the same for my children.  I want my daughter to not focus on her looks.  I want her to focus on her brain, on her personality.  Just because I would not choose to buy it, doesn’t mean some other little girl in her class has the same type of parents.  What is this shirt teaching THEM?  That she should force her “less pretty” friends to do her homework?  That she should make fun of someone that she doesn’t think is pretty??  Because it’s FINE as long as it’s in the name of being “sassy” right?

My second issue with the message of the shirt is that you shouldn’t do your homework, and to be considered pretty you should be smart.  I’m not a teacher, but I have some friends that are, that were or are and they were very upset about this t-shirt too.  Homework shouldn’t have a bad connotation associated with it.  If you keep telling your kids that “homework is boring and hard and yucky” then this is exactly what they are going to believe.

The third issue I have with the message is the brother part.  Which has the underlying tone that boys are smarter than girls.  UGH.

So, while I can see the point of my friends who say, just teach your kids that they are smart, that looks don’t matter, that girls can be smarter than boys, don’t by the shirt, etc.  Yes I agree and will be doing all of the above, so why am I so upset?

It was more of a last straw kind of thing for me.  I have been in a VERY male dominated industry my entire professional career.  I’m in Information Technology, what can I say.  I have always worked with a majority of guys.  I worked for an IT consulting firm, and we had several clients.  My role at the company was Rapid Response.  Meaning I was behind the scenes doing help desk calls until one of our clients had a critical business down server crash situation.  So typically I had never met with the client face to face, they would mainly deal with the person who was their regular IT Manager from the company.  If it was a client I had not been to before, I cringed in anticipation of “the look”.  This is the look I got on way more than one occasion.  It’s the look of “really?  YOU are here to come fix my crashed server?  Don’t you realize I have a business to get back up and running!  Isn’t there someone else that can do it?”  Some people would be bold enough to even SAY what they were thinking with that look.  I would get all the time, “Isn’t there someone else that can help me?”

So THAT is what had me up in arms this morning.  The fact that after all these years if MY daughter decided to go into IT like her Mommy, she would get that very same look.  It’s the fact that this sort of mentality isn’t just perpetuated, it’s ENCOURAGED.  Boys are smart, girls are pretty.  Of course that’s just the way it is.  People need to be TOLD that this is not the right way of thinking, and we need to be the ones to tell them.

Luckily today the social media wrath of women everywhere caused JCPenney to pull the shirt from their online store.  This isn’t about one shirt though, this is about an entire mentality of a large company that thinks this sort of thing was OK.

NO, Facebook Will NEVER Charge YOU!
The One Where HP Goes CA-RAZY