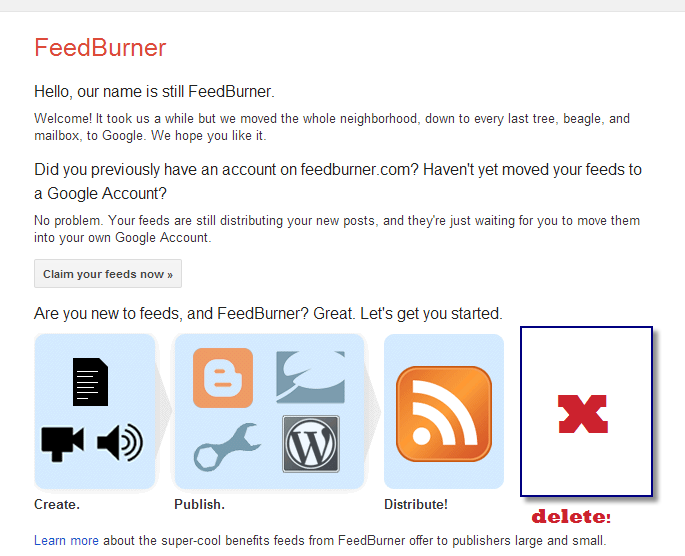 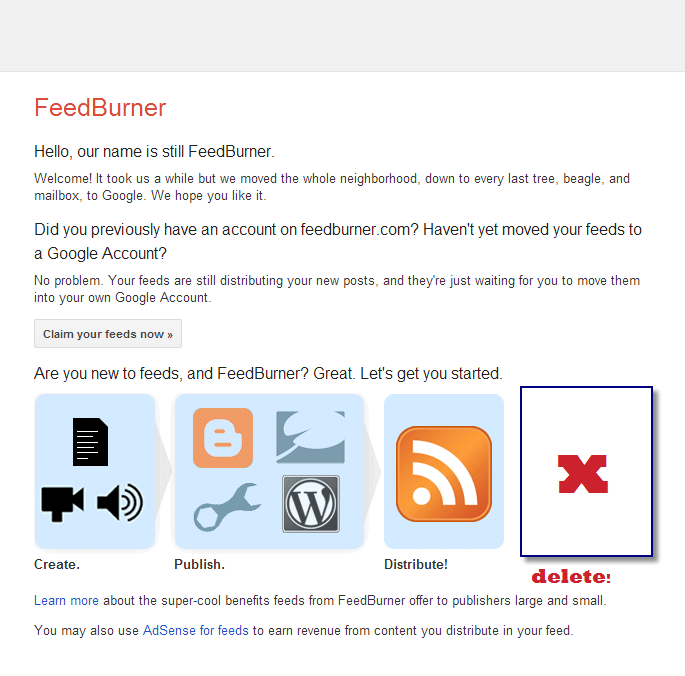 The internet and social media world has been all a-buzz with the news that Google will be disabling Google Reader in a few months. From their blog post about “Spring Cleaning” it is clear that they do not feel that RSS is a technology they want to invest in. They don’t feel that enough people are using RSS to warrant their involvement in providing Google Reader as a service. What does that mean for Feedburner?

If you have a Blogger blog, chances are you are using Feedburner to allow people to subscribe to your blog and follow your posts. If you ever moved at one point from Blogger to WordPress, chances are also good that you are also using Feedburner. So what does this mean for people like you? I’m just going to say right now, that the writing on the wall doesn’t look good for the future of Feedburner. Let’s break down the evidence, shall we?

A while back Google let the domain feedburner.jp, and the twitter account for feedburner was also removed. This caused a minor freakout back in the day, but just felt a little more like cleaning up old properties, and centralizing communication.

Then there was the hiccup where Feedburner was down for several days. Again, there was mass hysteria among bloggers, but it was resolved fairly quickly.

The other thing is that Google removed the API for Feedburner, meaning that no other products can use feedburner. (much like products like Tweetdeck use Twitter’s API for their product to function with Twitter). Not only that, but they disabled adsense for feeds, which means you can’t have any adsense ads running on your feed.

Since Google is displaying the fact that if they don’t see a future for a product, they stop putting man power on that product, and then eventually get rid of it. It just feels like, to me, that Feedburner will likely be in a round of “Spring Cleaning” by Google in the very near future.

So, now that I’ve scared you all, what can you do about it?

First I would sign up for a feed service and change out the links on your blog ASAP so that you can start collecting subscribers on your new feed URL. You can have your Feedburner feed running at the same time as a new feed. Whatever link you provide on your blog is what people will use to sign up. If they are signed up to your Feedburner link, whenever (and really if ever) Google deletes it, they will stop getting your updates at that point, unless they unsubscribe from the Feedburner link and re-subscribe to your new feed.

You don’t necessarily need a feed service though. WordPress and Blogger both have RSS feeds built into the programming. For WordPress you can have people subscribe to …

Many people still use RSS to have an easy way to keep up to date with their favorite blogs, including me. As you already know, I have moved my feed reader to Feedly, and really couldn’t be more happy. I even like their Android widget better than I liked Google Reader’s. There are companies out there that still care about RSS. Even though it doesn’t seem to be in Google’s business plan or best interests, it’s best for you to find a solution now before you are scrambling to find a solution later.

Skype in the Workspace Case Study
Google Reader to be Disabled