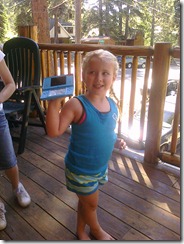 My Husband and I recently took a road trip to Tahoe!  It was so much fun!  We got to hang out with all of my siblings, and their families, and it really was a great time.  We had a conversation in the car, and then I won the conversation a bit later at the cabin.  It went as follows…

Sarah (as we were passing a Best Buy): We should get Maddie a DSi for the trip home.

Hubby: You’re going to have to show her how to use it the whole time!  It’s going to be more of a pain for you then it will be worth.

Sarah: She’s smart, she can figure it out as long as we get her some age appropriate games.

We then proceeded to the cabin, where at least 3 of her cousin’s have some sort of DS.  After watching them play it for a little bit they handed it over to her, and just as I thought… she was a pro! (She’s also 4 years old by the way).  So on the way home we will be stopping by a Best Buy and purchasing a DSi for Maddie (which may or may not also be used by my husband who probably played more of our nephew’s DSi than he did, which probably convinced him to buy it more than her actually playing it).

This entire scenario led me to this post though.  If you want to teach your children technology, and at a very young age, you NEED to expose them to the technology early and often.  Kids learning technology is all about exposing them to said technology instead of shielding them from it.  Too many parents don’t allow their children to touch their computers or use their devices for fear that they will ruin them.  The thing you have to do and remember is that they will only destroy the technology if you haven’t taught them how to use it and how to take care of it properly.  When you are first exposing them to it you need to be there.  Let them sit on your lap and use it, let them take a few pictures with your camera, but keep a close eye on them and teach them how to take care of it when you see them attempting to use it in a wrong way (eating the phone, pounding on the keyboard, etc)

The more you show your children that technology is something they can use to create, the more they will learn to appreciate, and handle the technology properly.